The CCB-Jazz Ensemble plays many arrangements made famous by a variety of Big Bands. While the history of these bands would fill many volumes, here’s a few highlights: 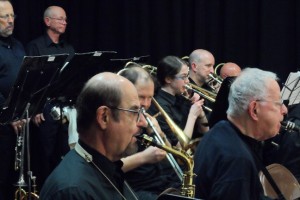 Duke Ellington, always ahead of his time, formed his first band in 1924. While not truly a Big Band, he played the first recognizable swing jazz with a group that included Harry Carney, Johnny Hodges, and others who would play with him for over forty years. While the Ellington band was highly acclaimed in its European tour of 1933, the American public didn’t take to the Ellington sound until 1940, when he released “Cottontail”, “Chelsea Bridge”, Perdido”, and “Take The A Train” in quick succession. After that, the Ellington band produced hit after hit with sparkling performances of the Duke’s prolific compositions.

Duke Ellington continued to compose and perform up until his death in 1974, featuring an array of top performers including Barney Bigard, Cootie Williams, Ben Webster, Jimmy Blanton, and his collaborator in composition and arranging Billy Strayhorn. After the Duke’s death, the band continued to play under the direction of Duke’s son, Mercer Ellington.

The first “big band’ we are aware of, was the Dorsey Brothers Orchestra, which was formed in 1934. Tommy and Jimmy Dorsey, along with trumpeter Bunny Berigan, drummer Ray McKinley, and trombonist and arranger Glenn Miller started a larger band, enlarging the section to three trombones to produce a big mellow sound, and Big Band Swing was born. The sound was an immediate hit, and other bands quickly added players to produce the new bigger sound.

The Dorsey brothers disagreed about how the band should be run, after a serious argument on the bandstand in the middle of a show, Tommy walked off. However, the remaining musicians became the Jimmy Dorsey orchestra and continued to play featuring vocalists Bob Eberly and Helen O’Connell, scoring big hits with tunes such as “Green Eyes”, “Tangerine” and “So Rare”.

Tommy Dorsey soon returned with his own band, which included such great musicians as Buddy Rich, Ziggy Elman, Buddy DeFranco, Charlie Shavers, and arranger Nelson Riddle. Tommy Dorsey had a string of hits including “Marie”, “Song of India”, “Boogie Woogie”, and, of course, his theme song “I’m Getting Sentimental Over You”. Tommy Dorsey was probably best known for his work with a young Frank Sinatra who turned out dozens of hits backed by Tommy’s band and the Pied Pipers vocal group.

In 1935, Benny Goodman formed his big band and made a huge step toward popularizing the swing style when he was picked to appear on the National Biscuit Company’s Saturday night radio show. This band, featuring such great players as Gene Krupa and Harry James had big hits with “King Porter Stomp”, “Don’t Be That Way”, “Stompin’ at the Savoy”, “Jersey Bounce”, and many others. Goodman’s band was featured in 1938 in the first Big Band Jazz concert at Carnegie Hall, and the recording of “Sing, Sing, Sing” from that concert is considered one of the all time classic big band performances.

Goodman shaped the music industry in another dimension, when he insisted on being allowed to mix black and white musicians on the same stage. His quartet with Gene Krupa, Teddy Wilson, and Lionel Hampton was a tremendous success both artistically and commercially. Goodman continued to perform with both the big band and smaller groups into the 1980’s.

In late 1936, a friend of Benny Goodman’s made him aware of a band out of Kansas City led by a young pianist named Count Basie. Goodman’s agent proceeded to sign up the band which made its New York debut at Roseland in 1937. The early Basie band played a bluesy, laid back style with hits like “One O’Clock Jump” and “Swingin’ the Blues”, featuring legendary players like Lester Young and Freddie Green.

As the band developed and continued to play it developed a more polished sound and drew on great arrangers such as Sammy Nestico for material. The Basie string of hits includes “Shiny Stockings”, “All of Me”, “Li’l Darlin’”, “Corner Pocket”, and “April In Paris”. The Count Basie band performed almost continuously into the 1980’s, and continued performing after Basie’s death under the direction of former band members like Frank Foster.

After leaving the Dorsey Brothers band, Glenn Miller played for Ray Noble until he started his own band in 1937. After struggling with personnel changes for two years, the summer of 1939 brought a huge success with recordings of “In The Mood”, “Little Brown Jug”, and “Stardust” as well as his theme song “Moonlight Serenade”. By 1940 the band had become one of the most successful of all times, featuring such great players as Billy May, Ray Anthony, Wille Schwartz, Ernie Caceres, Al Klink, and Tex Beneke.

In 1941 the Modernaires vocal group was added, and featured in “Chatanooga Choo Choo” which won the first ever Gold Record. Success followed success until in 1942 Glenn Miller enlisted with most of the band members to form the legendary Army Air Force Band. Miller led that band until his disappearance in 1944 over the English Channel. The band reformed and is still playing today, although with none of the original members. 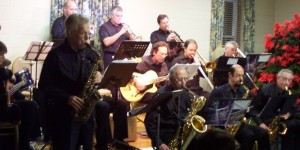